Five K-Drama portals that promise the best of entertainment

The Korean wave of K-dramas across the world has swept entertainment lovers off their feet. The outbound scope of K-drama and K-pop culture has further reached global audiences, a large number of whom are non-Korean. In the US alone, some 18 million viewers stream Korean dramas, and the country accounts for about 5-6% percent of the international viewership, according to the Korea Creative Content Agency (KOCCA).

However, one is spoilt for choice because several portals are streaming dozens of K-dramas – a case that can get frustrating for viewers who are looking for the best in class content. Koreatechdesk.com recommends these 5 K-drama streaming portals for all the K-fans out there: Founded in 2007, Viki (www.viki.com) is a service owned by a Japanese company Rakuten, which includes Viber, eBates, Lyft, and more, reaching a global audience of nearly 1 billion users. It offers over 1,100 K-dramas and Korean variety shows, including popular ones  “Boys Over Flowers,” “Suspicious Partner,” “My Love From the Star,” “Descendants of the Sun,” “Strong Woman Do Bong Soon,” “Pinocchio,” “Fated to Love You,” “To the Beautiful You,” “The Great Doctor,” “The Legend of the Blue Sea,” “She Was Pretty,” “Oh My Venus” and “While You Were Sleeping.”
Titles on Viki are available to watch free with ads; Viki’s ad-free, HD service costs $34.99 annually; Viki Pass Plus, which includes access to Kocowa’s programming, is $99.99 per year. Viki has over 40 million fans globally through its platforms Soompi, an English-language news site for K-pop and Korean entertainment, and Viki, which uses a crowdsourced subtitling model with content translated into over 200 languages. Apropos to its name (https://www.asiancrush.com), Asiancrush provides many Asian dramas and movies to watch. What makes Asiancrush a highly recommended website is the number of filters offered to help find the latest recommendation by the movie genre. Some of its most popular dramas are “My Sassy Girl,” “Bad Guy,” “Minyeo-neun goerowo,” “Namgeuk-ilgi,” “Oasis,” “Death Note: The Last Game,” among others. AsianCrush distributes the best of Asian entertainment media to a global audience, and its content is distributed across North America on the leading cable, satellite, telco, broadband, and mobile Video-On-Demand (VOD) systems. AsianCrush is a sub-division of Digital Media Rights. Netflix (https://www.netflix.com) is perhaps the most prominent international platform for movies. One gets a free trial for 30 days to watch anything from this website, after which it becomes a paid service. You can stream any drama, movie, or variety show through this website. It has a limited, yet the high-quality selection of authentic Korean drama such as “Something in the Rain,” “A Korean Odyssey,” “Romance is a Bonus Book,” “My First First Love,” “Black,” “Hello, My Twenties!”,
Rookie Historian Goo Hae Ryung “, “Cinderella and the Four Knights,” to name a few. The most popular and recent one is “Crash Landing on You” – an odd romance between North Korean and South Korean pair.
What makes Netflix a joy to watch is its break-free, commercial-free service that can dampen the excitement.

Kocowa, which was launched a year ago, is a joint venture of Korean broadcasters KBS, MBC and SBS. The Kocowa service streams popular Korean television programs on-demand in the US delivered five hours after airing in Korea. To date, it has attracted 500,000 users, including for ad-supported VOD content. Kocowa’s lineup of Korean shows includes exclusive US distribution of spy rom-com “My Secret, Terrius,” which previously was available on the popular DramaFever, which has shut down now. Other series include “Matrimonial Chase,” “My Healing Love,” “Where Stars Land,” “Should We Kiss First,” “Heart Surgeons,” and “My Only One.” Ad-free access to Kocowa is available for 99 cents per day, $6.99 monthly or $69.99 per year, besides the bundle offered by Viki. Besides scripted shows, Kocowa also features popular Korean variety programs, including “Hwarang: The Poet Warrior Youth,” “Wok of Love,” “Star Show 360” and “Running Man.” 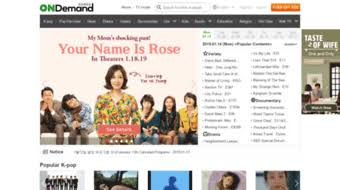 OnDemandKorea is a fully dedicated service offering the most recent and popular Korean dramas, movies, variety programs, etc., to those in North/South America. OnDemandKorea has the newest Korean shows and movies, and a massive catalog of accessible content from years past. All programs on the platform are updated within hours after they are aired in Korea so you can stay up to date with the latest in Korean programming. All contents are free (excludes certain Plus, Premium, Pay-Per-View contents). The ODK is accessible through a wide variety of devices such as your Computer, Mobile Device (Android, iOS), Apple TV, Roku, and Chromecast. Some of the popular titles to watch are “Dr. Romantic,” “Love with Flaws,” “Money Game,” “Want a Taste,” “Stove League,” etc.

[…] There you can find 44507 additional Info on that Topic: koreatechdesk.com/five-k-drama-portals-that-promise-the-best-of-entertainment/ […]

[…] Here you will find 54129 more Info to that Topic: koreatechdesk.com/five-k-drama-portals-that-promise-the-best-of-entertainment/ […]

[…] Info to that Topic: koreatechdesk.com/five-k-drama-portals-that-promise-the-best-of-entertainment/ […]