The company was started last year by David Song, a developer and Paul Kang, a business consultant. Paul, a working professional, was pursuing an MBA when he thought of several ideas for a startup and eventually teamed up with David to create Dreamfora. Koreatechdesk.com spoke to Paul Kang about the business, the app, the company’s vision, and aspirations.

1. Can you tell us about your startup?

Our company name Dreamfora is the same name as the product we are providing. It’s a goal-setting app that helps people to easily set their goals and manage their plans. One of the core value propositions of our service compared to other goal-setting apps is that it is super easy to set concrete long-term goal plans with our service. If you use other goal-setting apps to plan your new year’s resolution, it will take more than an hour to set up. With our app, it takes less than a minute because we provide tangible goal achievement plans made by experts of each field.

2. What is your long-term vision as a company?

Our current service is a tool which can help people to easily make their plan. Ultimately, we want to provide a space where people can share their thoughts and encouragement and compete with each other to achieve their goals. Facebook defines you by who you know; we want to make a social media that defines you by your dreams and aspirations. That’s our vision. By making our tools popular, gathering more people, understanding the user base, and utilizing the data they generate, we eventually want to evolve into a social media focusing on long-term goals.

3. Can you describe the app in detail as to how to use it?

Dreamfora is a goal-setting app. It provides templates in which users can utilize to create achievement plans to reach their goals. To help users stay on track, it can provide reminders and notifications—a customizable feature to best cater to the individual. Using the user’s progress, the app provides statistical analysis to show the user that their plan is working. Other goal-setting apps only provide a blank page with templates. There is no plan and no content. In contrast, our app provides a real plan. By selecting a goal to achieve, all the achievement plans are automatically inserted into the app. This makes following the milestones and the bite-size small steps simplistic to allow anyone to easily achieve their goal. 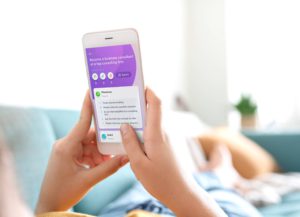 4. Can you give an example – how would you use the app personally?

Personally, I mainly use the app to check my habits, which are helpful for me to achieve my long-term goals. For example, if I want to read 100 books in a year, I need to frequently read and create a habit of it. On Dreamfora, I would select a habit: ‘read a book during the commute time.’ During my commute, the app would automatically alarm me to read books. At night before I go to sleep, I would check my progress, see my improvement through the statistical analysis, and become motivated to continue reading the next day. While this is a simple example, there are lots of useful goals in which our app provides the plans for users to pursue such as becoming a morning person, learning guitar, or getting fit. With a click of a button, people can select a goal that they want to achieve and implement the small tasks guided by the app until they achieve it.

5. When is the app launching officially? Will users need to purchase it?

Currently, we are running a beta test on Google Play Store. We plan to officially launch the service in the fall in a couple of months. Our team is working hard to fix some major/minor bugs and an overall design renewal. The app will be provided for free; users can enjoy the app without any cost.

6. Can you tell us about how you founded the company and about your founding team’s background?

I was a management consultant at Bain & Company for 10 years. During my employment, I obtained my MBA from the Kellogg School of Management at Northwestern. When I wasn’t studying, I created a list of startup ideas. Thus was born Dreamfora—the idea of an app for long-term goals with a social media aspect. However, I didn’t know how to make my vision a reality. It was a chicken and egg paradox. Should there be enough people to generate content, or should there be enough content to attract people? Regardless, I had neither one of those. One day I had an epiphany: by attracting people passionate about planning and managing long-term goals with a useful tool, the data the users generate can be utilized to transform the app into a goal-based social media. It was my “A-ha!” moment. After I brainstormed the details, I pitched my co-founder David Song to join me on this journey to create Dreamfora. David obtained his MBA from the Wharton School of the University of Pennsylvania and is a full-stack developer. I have always wanted to start a company with him; we ultimately teamed up. Both of us agreed that with this idea, even if we fail, he wouldn’t regret. After about 3 years of preparation, David and I left our secure jobs to begin this incredible journey together.

7. Can you give us insight about your business and the challenges you faced?

When I look back, I was a little naive when I first started my business. I thought that if we provided some attractive features, then people would intuitively use our service. However, I realized that having decent quality with smooth functionality is the base standard to provide as a mobile application. If the overall UX is not good enough then people won’t use it. Making a decent quality app is not easy at all; it’s a challenge. Before we release our official version, we’d like to spend enough time to ensure that the app provides a decent user experience. It may sound as though we are going against “lean-startup practice”, but as a mobile app in the productivity category, this is a basic qualification.

8. What is your marketing strategy and are you targeting an international audience or the domestic Korean audience?

Our service targets international audiences. There is no border in the online market. The best way to reach out to international audiences is by using social media such as Facebook or Instagram. About 300,000 people are following our Facebook page; we are working towards strengthening our Instagram presence as well. We have tested social media advertisements several times and learned how to attract people. We plan to fully utilize our social media fan base and our digital marketing know-how to promote our service.

9. What countries are you targeting particularly for the app?

Our top-priority target regions are North America and Europe. As of now, our app is only provided in English due to our limited resources. We target countries using English as their mother tongues such as the UK, Ireland, Australia, New Zealand, Canada and the USA. We also target several European countries such as Northern Europe, Netherlands, Belgium, etc. According to the data, 50% of global mobile app revenue is coming from North America and Europe, and those two regions have well-developed self-development markets. Therefore, we started with the global market.  99% of our current users – the beta testers – are non-Koreans.

10. Can you tell us about the funding history for the startup?

First, David and I provided the seed money. After hearing about the app, some friends of mine asked if they could invest in Dreamfora. That composed our angel funding. Additionally, we won a couple of government-held startup competitions which proved to be useful sources for our team to sustain last year.

11. What is your milestone to achieve before the next round of funding?

After we officially launch the service, the next step is making good key performance indexes (KPI) which show the sound growth of our company. Good KPI doesn’t only mean the size of the users, but rather the trend of growth. If the growth speed is fast with a low churn rate, then I can confidently say we are going in the right direction, even if the download size is small.

12. How will funding from Venture Capital companies help?

Funding from Venture Capital companies will help in recruiting people, mostly developers. We want to speed up product development speed by recruiting more developers. There is one problem: it is not easy to convince people to join our startup company with only an ambitious vision. Proper compensation packages incentivize top-talented people. Fund-raising from credible venture capital would be beneficial for our team to recruit competent people in the perspective of the brand as well as financial resources.

13. Where do you see the company growing in five years’ time?

Our aspiration is to have more than 10 million users in five years. Our core target market is North America and Europe. With users from ages 20 to 29 years old who have smartphones and willingness to purchase (not just use, but purchase) a self-development app, the number of users will grow to 32 million. We believe the location and age range are the Serviceable Obtainable Market (SOM). If we expand the age range from 15 to 44 years old, the size of the audience becomes 98 million. This is the SAM (Serviceable Available Market). If we expand the region from North America and Europe to global, the number exponentially increases to about 600 million. Clearly the market is large enough. To compare, there are already several goal-setting apps which have over 10 million users. The issue with those apps is that they only provide templates without tangible content. As a service providing an unprecedentedly unique feature—tangible goal achievement plans made by experts—I don’t think it is impossible for Dreamfora to achieve 10 million users.

While our current app may look like a mere goal-setting tool, our ultimate goal is to become a place where users can enjoy profound content related to the various goals they want to achieve. Users will be able to share their ideas, collaborate, compete, and motivate each other in our service. We dream to become a service which empower more people to move forward towards their goals and live better lives.

[…] Read More on that Topic: koreatechdesk.com/dreamforas-paul-kang-aims-to-make-his-goal-setting-app-a-global-success/ […]